June4,2013 my life changed forever.
While sitting in my car, I suffered a massive Ischemic stroke.
I could tell there was something wrong with me and felt very confused. And scared! My husband was concerned that I wasn't home and called my sister to see if she heard from me , she and I were connected via the (no longer available) Google Latitude App. She looked for me and was able to tell my husband Tom I was at the gas station. He drove there directly

When he found my car in the parking lot, he put his hand my shoulder and assured me I was alright now. Feeling his hand made me feel safe and at peace. He then called for help, telling dispatch his wife had a stroke(he based that on my face being droopy on one side). When the ambulance arrived they agreed and drove me to the hospital where I was given a clot busting drug(TPA), which makes all the difference in avoiding long term deficits ,
I had emergency brain surgery, my neurosurgeon is a genius (in my opinion), he took the portion of my scalp he removed, and placed it in my belly to keep it viable. Some doctors opt to put it in a freezer, which often makes it not fit back on the head properly. I  received a tracheotomy and was put on breathing tube, and receive d feeding tubes.

WHOA,I left out a huge part of my story. Several days before my stroke, I went to see my primary care doctor as I had some unexplained swelling in my left calf and experienced partial, unexplained blindness in my left eye. I was in the middle of training for my first half marathon and wanted to be sure it was safe to continue. A that appointment, I updated my health history telling her my father recently died from complications due to stroke. This doctor was preparing to undergo a C-section and go on maternity leave the next day, and appeared distracted. She told me she did not believe i was at risk for stroke. She did order an MRA, which found nothing. two weeks later, I had the stroke.

Having said all that, I cannot praise the doctors and nurses at my hospital(Munson MedicalCenter) enough. They took an awful situation and made it easier for me to bear(from teaching me to use a bedpan, to praying with me). I was only 45 years old when I had a stroke. Remember stroke knows no age. 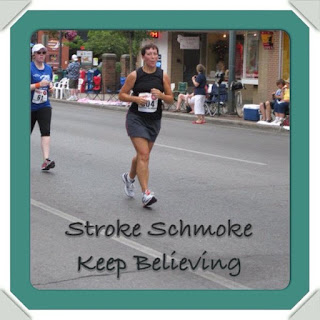 I spent the entire summer in the hospital. i lve in a gorgeous resort town, so I missed out on some great beach days, my son's fifth grade graduation. Having served as president of the PTO at his school this event was something to which I was looking forward.i am blessed with an amazing extended family and sister, nieces and nephews drove up to celebrate with him. After discharge from the hospital I was transferred to a nursing home which was a strange experience for sure